Dental implants are artificial roots. They usually come in the shape of screws or cylinders. When set into the jaw-bone, implants replace lost roots. 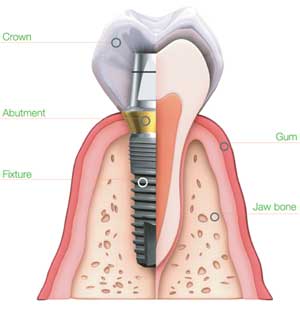 Implantology has been an approved form of treatment since 1982. There are many different kinds of implant systems. But these differences do not concern the patient. After years of use and testing, all of them are highly developed. Scientific studies conducted during the past 25 years prove that implants are highly successful. Assuming that healing is successful, after 10 years over 90% of implants are still functional.

For purposes of comparison: 80% of ordinary bridges are still in use after 10 years. If a tooth is preserved using a root filling,which is not performed by a specialist- a so called endodontist,it only has a 50% chance of lasting beyond the first 10 years. These figures prove that in terms of longevity, implants are superior to ordinary dentures!

In spite of the advances made in this field, some patients are still uneasy, because they read or hear about allergies. Serious literature describes no allergic reactions to titanium, and the claim that “My body would not accept an implant” is not correct, even if some patients lose their implants. But why is this popular misconception „titanium allergy“ still existing? The medic would answer-iatrogenic caused, thus caused by doctors.

Rumours are developed by misinformation on the part of medical profession. Implantalogy is a very profitable branch in dentistry, unfortunately that´s a reason why implants were and still are inserted to improper patients.

Improper for example: inflamed mouth areas, disregarded anamnesis (e.g. heavy smoker),.. Implants can be lost by these Indicators after a few weeks/months or years. Doctors rarely admit errors, much often a patient hears the sentence: “You are allergic to titanium.” This is how the titanium allergy is founded. Implants are a very good therapy if there are no inflammations (e.g. parodontitis, bad root treatment,…)

In spite of exact work, an implant does not heal properly and needs to be removed later on. It is unfortunate, but it happens very rarely. It also does not cause any serious physical damage, since new bone matter forms to close up the resulting gap. Re-implantation is usually possible. More on this in the video “implantation”. And even if an implant is lost, it is possible to insert an ordinary denture instead.

Implantation refers to the process of inserting an implant into the body or an implant anchor into an implant base.

Here you can see how an implant is inserted into the upper jaw, after a puncher is used on the mucuous membrane and the bone is prepared.

In a two-time procedure, the implant is inserted, after which the bone is allowed to heal before prosthetic treatment is performed. A distinction is made between open healing and closed healing. Open means that a healing cap which promotes gum formation is inserted immediately following the implant, as can be seen here in the lower jaw. In this case, four implants have been set, the wound closed, and healing caps stick out of the mouth.

Closed healing, on the other hand, means that the wound is sewn up tightly after the operation, as can be seen in this video – nothing sticks out of the mouth. The drawback to closed healing is that after healing, the implants have to be cut open again, in order to provide access to the implants (a procedure called exposure) – the healing caps are applied for about a week before the final denture is inserted.

Nowadays, improvements in materials make it possible to perform all necessary steps in one operation, if a second session is necessary, open healing is usually used to avoid a second operation.

Registration with a doctor